You are here: Home1 / Validated Phone Information2 / Why Phone Verification Service is Important: The Lifecycle of a Phone ... 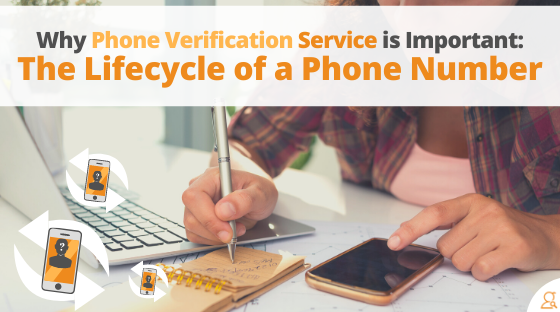 Phone verification service identifies whether or not a phone number is real and active. Some phone numbers are fake and are never active (and there are ways to tell), but others change statuses throughout their lifecycle.

If phone numbers are an important part of your customer data, what’s arguably worse than collecting invalid phone numbers is reaching out to a phone number that has changed hands.

Phone verification service provides much more information than just the validity of a phone number. Just because a phone number is valid does not mean you can or should reach out to it.

Unfortunately phone number-based security can be compromised, and you cannot call a phone number listed on the National Do Not Call Registry (DNC) without assessing huge fines. Phone verification service checks your data to ensure you only collect good data and to help you to use it effectively and safely.

Phone verification service can be used at the point of entry to provide real-time information and batch verification should be used periodically to verify data that might have changed over the course of its lifetime. In this article we discuss all of the changes a phone number can undergo through its lifetime and share tools you can use to make sure you’ve got good data at every stage.

Who Owns a Phone Number?

Individuals do not own phone numbers. They lease them from carriers or service providers like AT&T, Sprint, T-Mobile, Verizon, etc. These companies get blocks of phone numbers from Bellcore/Telcordia and the North American Numbering Plan Association (NANPA), the organizations that administer them.

Then, the carriers assign phone numbers to users from a pool of available numbers. Valid phone number format for US numbers is ten digits: 3-digit area code plus a 3-digit prefix and 4-digit line number. Available numbers include numbers not currently in use or which have not been used in the 90 days prior.

Area codes are regulated by the Federal Communications Commission (FCC) and correspond to specific geographic regions. Each city or group of cities in a particular area of a state has its own area code.

The 3-digit prefix used to refer to the specific switch the line connected to, but now that phone technology has moved away from manually operated switch boards to computerized ones, numbers can move from one carrier to another.

What Happens When Someone Switches Carriers?

If phone numbers are owned by carriers, what happens when someone switches service providers? There are many reasons users might opt to change carriers. They might take advantage of a promotion to save money, they might be in search of better service, or they might move out of a carrier’s local-rate area.

Rate centers are specified local calling areas to which local or flat-rate landline calling is provided. They are used to determine billing costs for long-distance calls.

Local number portability (LNP) refers to the ability of a phone customer to reassign his or her number to another carrier. When this happens, the phone companies have to complete paperwork to transfer ownership of the phone number from one carrier to the other.

Porting is convenient for customers who have their phone number for a long time and don’t want to try to remember a new one. It also makes users more reachable as anyone with the original number can still use it to contact them.

Porting has its downfalls as well. Without the proper security measures, numbers can be ported without a customer’s knowledge. This can lead to identity theft and account takeover where phone numbers are used for two-factor authentication to obtain account access.

No matter the reason for a customer’s carrier change, it could affect you depending on your reliance upon telephone marketing. For SMS marketing, knowing the carrier of a phone number improves the deliverability and security of sending text messages.

You can conduct a phone carrier lookup one by one with a phone number lookup tool or in bulk with a batch phone number verification tool. Batch solutions are great for businesses with large databases. You can get the information you need for hundreds of numbers in minutes.

Save time and money by verifying numbers at the point of entry with an API. Then run your data in batches through a verification process once or twice a year to identify and adjust information that might have changed.

What Happens When Someone Switches Phone Numbers?

Not all phone numbers can be ported. It depends on your service provider and local-rate area. So if you move, you might not be able to keep your number.

When a number can’t be ported, a number change is required. Of course there are other reasons to change numbers: too many spam calls, a pesky ex, job change, something easier to remember….

Regardless, most people do not contact all of the merchants they do business with to notify them of the update. According to the FCC, about 100,000 phone numbers are reassigned by wireless carriers every day, and approximately 35 million are disconnected in a year.

What this might mean for you as a business owner is that if you try to contact consumers using outdated information, you aren’t likely to reach them. What’s worse, that number in your database that you verified prior could be registered by the new user on the DNC list.

Unwittingly calling or texting a number listed on the DNC list could earn you millions of dollars in fines assessed per number! To prevent TCPA violations, the FCC recommends scrubbing or cleaning your database every 30 days.

And there’s of course the security aspect we mentioned earlier. When a phone number is recycled, websites and apps that text and call codes to customer phone numbers don’t reach account holders, and account hackers then have access to accounts that haven’t been updated.

About 30% of consumer data is inaccurate. That’s a startling number. But a simple batch phone number verification every once in a while takes seconds, costs little, and saves you time and money in the long run.

What’s the Difference Between Mobile Phone Number and Landline?

Phone verification service also identifies the line type of a number. Differentiating between landline and mobile numbers helps you choose the right channel for sending marketing messages and verification codes.

Regulations on mobile numbers are more broad considering their text capabilities and personal nature. So you’ve gotta know what rules apply when sending texts and making calls to consumers.

Landlines are not obsolete when it comes to marketing. They do still exist and you can still make marketing and follow-up calls provided you remain compliant.

Therefore, there’s a good chance you’ve got more landline numbers in your database than you might expect. And you can’t distinguish a landline from a mobile number at a glance because they are formatted the same. But you can use a batch phone verification service to get this information.

Don’t waste money sending text messages to landlines. Or to disconnected or fake phone numbers! While invalid and fake phone numbers can be pretty easily identifiable, phone verification service can determine the validity of phone numbers in seconds without you having to manually comb your contact list.

What is a Valid Phone Number?

Valid phone numbers actively receive text messages and phone calls. That means they have to be formatted correctly, be in service, and be legitimate. While approximately 30 million phone numbers are disconnected each year, keep in mind that they do get recycled.

The average phone number once abandoned by a customer might only be disconnected for 90 days before being recycled, or reassigned to another customer. Daily, about 100 million telephone numbers are reassigned.

And of course, valid phone numbers must follow the 10-digit pattern we described above. If a number has an extra or missing number (excluding any necessary country codes), it won’t be valid or reachable; calls and texts will not be delivered. This can be a huge waste of money.

Fake phone numbers are also not going to receive texts or calls. Someone could make up a number that is valid, but that doesn’t belong to him or her, to avoid receiving marketing messages. This can be costly if you reach out to a number whose actual owner has not given consent to be contacted. Not to mention the embarrassment of addressing a message to the wrong person.

Other fake phone numbers are identifiable at a glance. For example, phone numbers using the prefix 555 will not be valid or reachable. Numbers 555-0100 through 555-0199 have been reserved for use on television and in other media. This prevented stars—or the poor unsuspecting customer assigned that number in real life—from being contacted and harassed by fans and prank callers.

Phone Verification Service and the Lifecycle of a Phone Number

These changes occur irregularly. There is no way to predict when data you collect will become outdated, so it’s important not only to make sure your data is valid before entering it into your database but also that your data remains accurate.

Searchbug’s phone number API checks data at the point of entry and our batch phone number verification service maintains the accuracy of that data over time. Additionally, you can use phone verification service to identify other important pieces of data such as reachability, line type, LNP check, and DNC list check to ensure that you always have the most complete data that you can use responsibly.

Don’t waste time and money on incomplete and inaccurate data. Invest in phone verification service today to enhance your data!